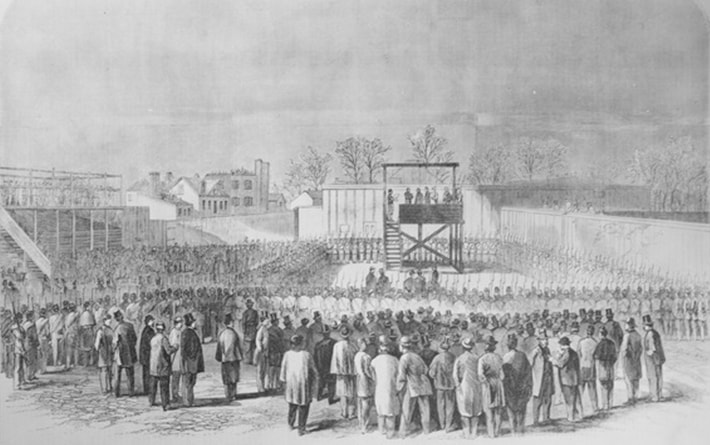 Two public executions, like this one in San Francisco, took place in Ravenna in the 19th century. (picture credit: http://thereaper.rip/americas-last-public-execution/)
CHAPTER XL
The Most Noted Criminal Events in the History of Portage County- Trials and Sentences of the Culprits—The Alleged Crime of John McManus—The Murder of Mathews by Aunghst—The Murder of Cummings by Barris—The Murder of Catherine McKisson by her
Brother-in-law, David McKisson—The Heathman Manslaughter Case —Alanson Baldwin Stabbed to Death by His Nephew, Lemuel W. Price—Attempted Killing of Prentiss by Flower—The Shorts-Wilson Shooting—The Murder of John Rhodenbaugh by Jack Cooper and Joel Beery—Harriet Musson Murdered by Wilson S. Hoof- Shooting of Alfred L. Harris by His Father—The Kelso-Montague Case—The Newell-Roberts Affair.

It is considered, by the Court, that the said Henry Aunghst be taken from hence to the Jail of the County of Portage, from whence he came, there to remain until the last Saturday of November next, being the 80th day of November, on which day he be taken to the place of execution, between the hours of 12 o'clock at noon and 2 o'clock in the afternoon, and there to be hanged by the neck until he be dead.