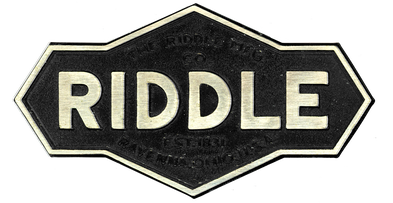 by Tom Riddle and Betsy Riddle Whitmore,
Great-grandchildren of Henry Warner Riddle I, the president of Riddle Coach and Hearse 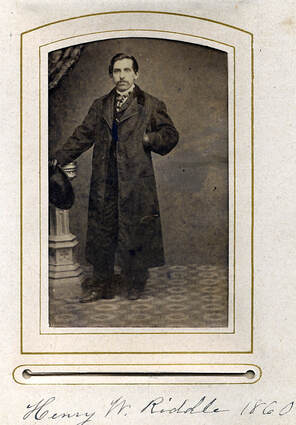 Click any image to enlarge it in Flickr.
The Riddle Coach and Hearse Company of Ravenna, Ohio has a long history dating back to 1831 when it began as the Clark Carriage Company, owned by N.D. Clark.  The Clark Carriage Company was bought in 1861 by brothers-in-law, Charles Merts and Henry W. Riddle, our great-grandfather.  He was 22 years old.  The new name became the Merts and Riddle Coach and Hearse Company.

Charles, a fine tool maker and woodworker, supervised the factory while Henry went on the road, selling.  He would take a string of vehicles and not return until they were sold.

The men upgraded the coaches to a high level and introduced the hearses.  Artisans from around the world were brought in to do fine wood carving and trimming.  All of the construction was done by hand in the Ravenna factory.  In 1891 Merts sold his share of the business to Riddle and again the name changed, this time to Riddle Coach and Hearse.  When the company began producing motorized vehicles, the name again changed to Riddle Manufacturing Company. 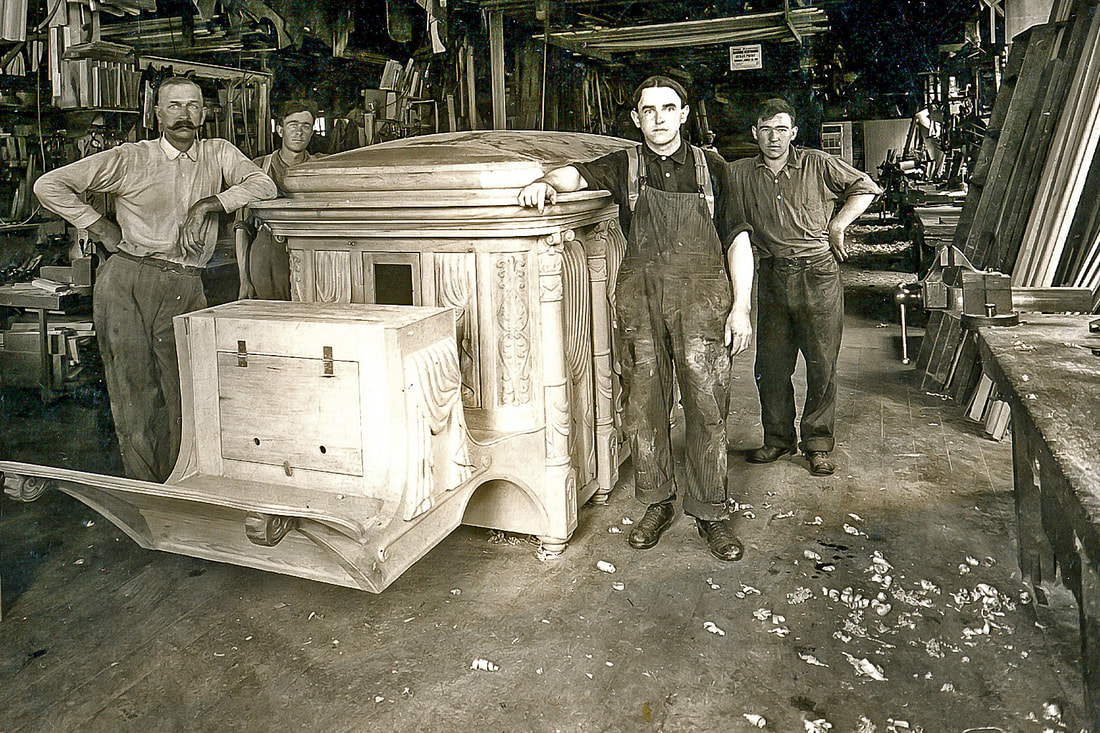 Click to enlarge.
The Riddle hearses became known for their fine quality.  Presidents McKinley and Harding were carried to their graves in Riddle hearses.  In 1998 Roy Rogers’ body was taken to the cemetery in a restored Riddle Hearse. 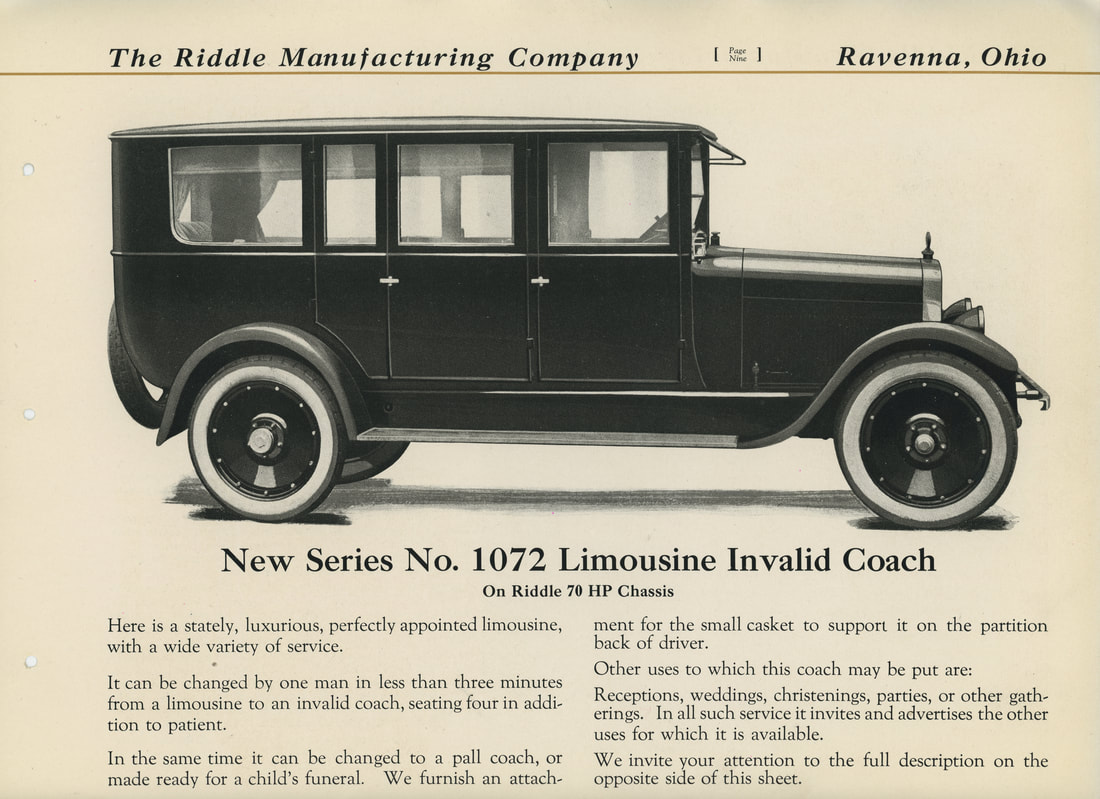 Motorized hearses, including ambulances, were made at the factory beginning about 1911.  In the mid-1920s the factory needed to change from proudly hand-crafted production to assembly-line techniques if it was to keep up with the competition.  After some family in-fighting, such a major change was deemed too costly and in 1926 the factory closed.  For more in-depth histories of the factory, we have two excellent articles for you:  Riddle Coach and Hearse Co and PDF of an article that appeared in the a regional car magazine.

Above is a funeral procession of Riddle coaches with a Riddle hearse in the front.

Above is a line of motorized hearses in front of the Riddle Manufacturing Company on Main Street in Ravenna.

The company had at least some international exposure in that they produced a Spanish-language poster to be distributed in Mexico and central America; we have both the English and Spanish versions of that poster below. 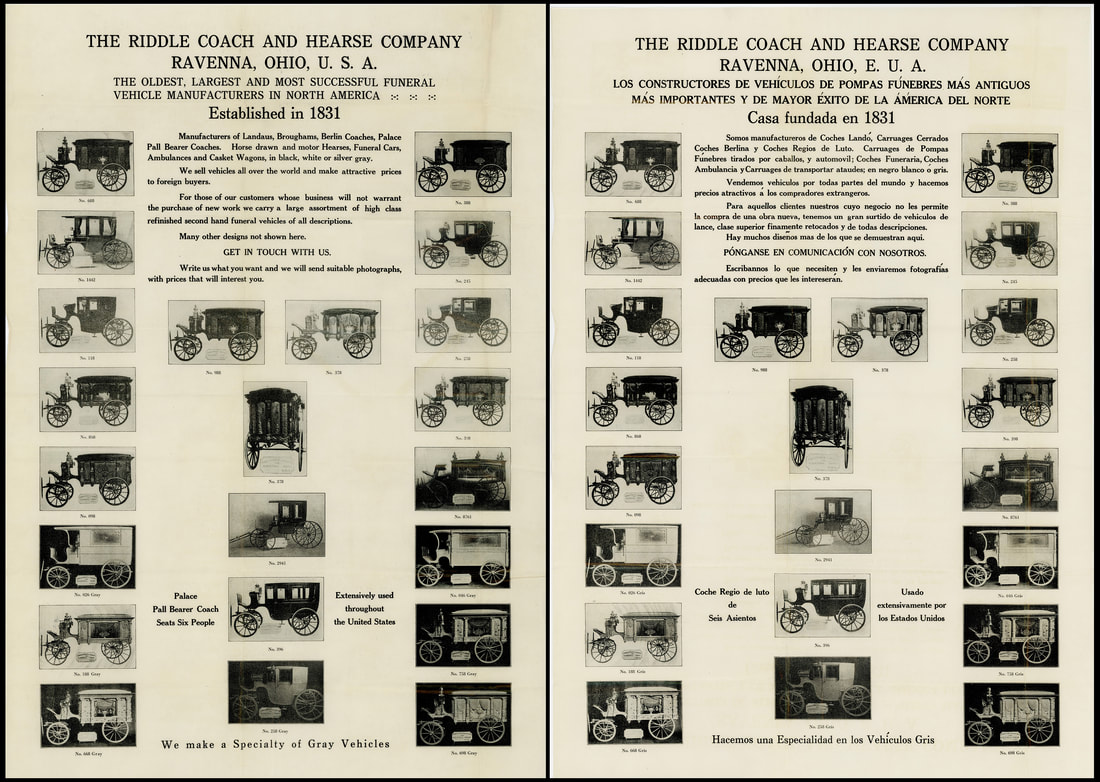 Customer service was important to the company as was communicating with the full-time traveling salesmen.
At a time when telephones were just being introduced, this meant that the postal system and letters were of vital importance. Careful records were kept of the correspondence, some of which you can read in this PDF:

Download File
Many of those letters are masterpieces of salesmanship while others are carefully worded pleas for money or attempts to smooth over dissatisfied customers.
Below are PDFs of the catalogs of the company.