Our 12 acre campus has many attractions, some of which are for rent

​ John Lowrie & Mary Helen Beatty Museum & Library
The John Lowrie & Mary Helen Beatty Museum is located on the upper floor of the Museum & Library Building. The museum was built in 1968. The cathedral style stained glass window on the west end of the building came from the 1882 Portage County Court House in Ravenna. There is a small gift shop in the basement near the main entrance.
​Learn more about the museum->. Learn more about the library and gift shop->.

Strickland House (rentable)
​George Strickland built this home in 1869 for his wife Lucretra Welton Strickland. They were married August 26, 1867 in Ravenna. His father, Willis Strickland lived in the Salmon Carter home next door. The Historical Society acquired it in the 1970s.
​Learn More->

Salmon Carter House
The Carter House is a notable example of a Greek Revival farmhouse built by one of the first generation settlers in the Western Reserve in 1835.
Learn More -> 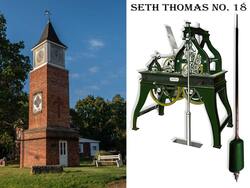 Indian village
Visit a hypothetical, stone-age living site right here in Portage County. Let it stir your imagination as you step back to the time when the glacier was just leaving our county. This was a time when people just like us were living with the same types of challenges: aging, the challenges of youth, hot summers, cold winters, shelters, seasonal migrating strategies, trading, family relationships, spectacular failures and successes.
Learn More ->

Campbell Land Office
John Campbell was a colonel in the Ohio Militia and a land officer. He built the brick land office in 1810-1811 for his headquarters in Campbellsport, which is about three miles southeast of Ravenna. The original area is located along what is now State Route 14 and West Branch State Park. The building is 20 feet wide and 14 feet deep. It has a fireplace and a loft.
It is believed to be one of the first land offices in the Western Reserve. During the War of 1812 the building was used as a mustering headquarters and a hospital. In early 1964 the state was acquiring land for West Branch State Park. The owner of the land where the Campbell building sat was Mr. Harry Korpita. Since he had to move because West Branch State Park was taking his land, Mr. Korpita donated the building to the Society and Donald Ott, a building mover from Warren, Ohio, moved it here on March 1, 1964.
The building is open for tours.​
​Learn More -> 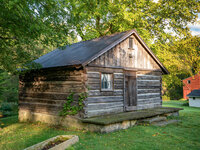 Log Cabin
In the summer of 2004 an early 1820’s hand hewn log cabin was reconstructed on the grounds of the Historical Society. The cabin has been completed and is furnished to the period of the 1820’s in mostly primitive country antiques.
Learn More ->

Amphitheater (rentable)
The Amphitheater is available for events that require an outdoor stage. There are electrical hookups for bands and a cover for the stage area. The deck of the stage is made of composite lumber.
Learn More ->

Ford Seed Company
The Ford Seed Company Collection is housed in a Photographers Studio that was originally located on South Street in Garrettsville. Mrs. Nellie Hurd of Garrettsville donated the early 20th century building to the Society. It was moved to the museum grounds in 1976. The building contains the original backdrop used by the photographer. There is also a large window just opposite the screen to allow extra light needed to take the photos. The building was used as a workshop before it came to the museum.
Frank Ford founded the Ford Seed Company, located on North Chestnut Street in Ravenna, in the early 1880’s. The company was known worldwide for their catalog seed sales. Mr. Earnest Jones bought the seed company in the late 1940's. Mr. Jones was a member of the Historical Society and when he retired he donated the contents of the Ford Seed Company store to the Society. The building is set up as a general store with many odds and ends that would have been for sale to the local residents of the day.
Learn More->

Mahan New England Barn
The early nineteenth century New England "Yankee Barn" was moved to the Society in 1974.  Miss Ardis Pfile was the donor of the barn, located on Dawley Road in Ravenna Township. Alfred C. Mahan, M.D., a former Portage County resident, provided generous funding for the moving and rebuilding of the barn. It is named in honor of his mother and father.
Amish men from Burton, Ohio disassembled the barn and marked each piece for the proper reconstruction on the museum grounds. Some of the posts from the barn were decayed and needed to be replaced. A barn built in 1830, located in Palmyra Township was being torn down and material was donated from this barn to finish the Mahan Barn. The Barn was finished in August 1976. The barn measures 40 feet x 30 feet. The barn is currently used for storage. Future plans include display cases with tools and other farm related equipment.
Learn More ->

The Mantua Glass Company (1821-1829)
In 1812, Daniel Ladd built and operated a tannery in Mantua Township. In the fall of 1821, his brother David bought the building and converted it into a small glass factory; the first in northeast Ohio. It operated until 1829, when it most likely burned to the ground. The factory produced hand blown bottles and other small items. The site, located on Sheldon Road, has been excavated several times, and is now owned by the Historical Society. Some of the foundation is still visible. Bottles produced there are on display in our museum.
Portage County Historical Society