Text by Jack Shaffer,
​historic pictures from the Portage County Historical Society and the public domain.
(The article below previously appeared on the now defunct "Friends of the Flagpole" website. 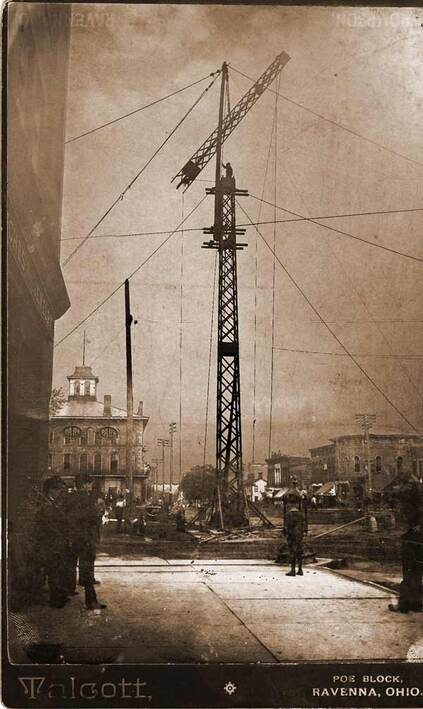 The Ravenna flagpole was built for Ravenna Township and the Village of Ravenna in 1893 by the Van Dorn Company of Cleveland, Ohio.  It replaced a wooden flagpole that was blown down during a windstorm.  The community leaders believed that the American flag should be flown at the center of the Portage County Seat on a pole that was befitting the Stars and Stripes.

This structure is a splendid and rare example of the use of iron structure developed for the construction of bridges and other monuments of civic expression.

The 150-foot tall flagpole, just 13 inches shorter than the copper section of the Statue of Liberty, consists of a 100-foot riveted steel lattice box lower structure and a 50-foot welded tubular steel pole at the top.  The entire structure is anchored to its foundations by diagonal struts at the base.  The use of built-up steel members in the late 19th century for bridges and other structures provided an interesting kit of parts that could be used for all kinds of purposes.  In this case, the idea was to use the steel box lattice structure to support a flagpole that must have been one of the earliest using this technology and one of the highest flagpoles in the country in the late 19th century. 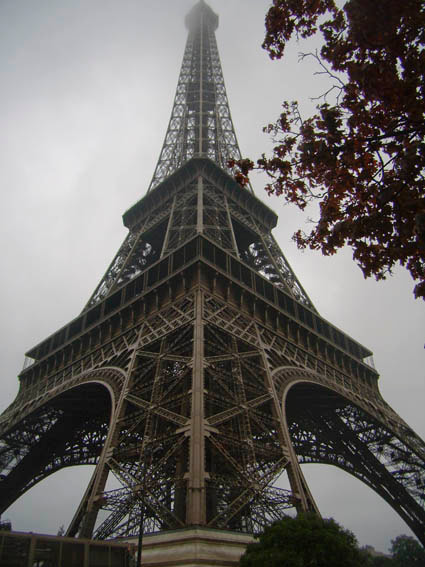 With the advent of the automobile, the flagpole was moved 15 feet from its original site in the public right-of-way in 1923.  The ornamental iron fence that originally surrounded it was lost during the move; the fence was replaced after the 2014 renovation.  Thus, the flagpole remains almost exactly as built, still adorning the front of the Portage County Court House.  The 15-foot move itself represents an interesting example of early 20th century ingenuity.  The 150-foot pole was unmoored from its foundation, jacked up eight inches and then lowered onto rails put in place for the move.  It was then pulled along the tracks by a winch to its new site where it was lowered to the ground and secured in place.  The entire 1923 operation took 12 minutes and was engineered by Ravenna’s C. R. “Chet” Jones, who was well-known throughout northeast Ohio as an expert in moving large structures. 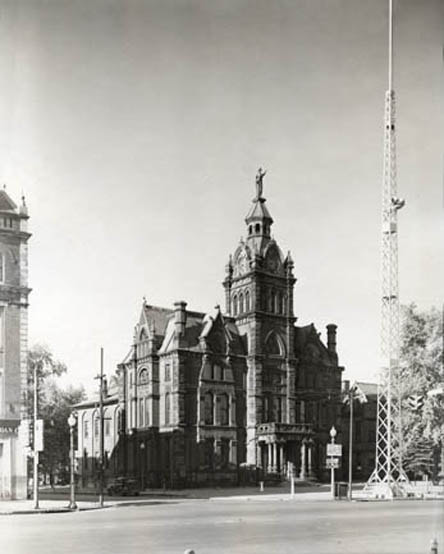 The Portage County Courthouse and the Ravenna Flagpole in 1948.
The structure retains pretty much all of its original material.  It has been repaired and repainted, but most of it remains exactly as it did on the day it was erected, using riveted steel framing.

The pole was erected by the Van Dorn Iron Works Company of Cleveland, Ohio at a cost of $800.  The same company erected three other similar ones in New York State.  Only one, with a shorter pole, still stands in Palmyra, New York.  This company, founded in Akron in 1872 by James H. Van Dorn, made a wide variety of metal objects ranging from ornamental fencing to mail boxes, jail cells and urns.  Other works of the company included the structural steel for the Williamson Building in Cleveland, the 150-foot diameter steel intake crib for the Cleveland waterworks in Lake Erie, the cells for the Nebraska, Connecticut, Maryland and West Virginia penitentiaries as well as the “Tombs” in New York City.  They also fabricated metal furniture for a variety of companies including the famous steel chairs designed by Frank Lloyd Wright for the Larkin Company in Buffalo.
In 2012 Robert Bruegman, Professor Emeritus of the Art History Department at the University of Illinois at Chicago, recorded this video in which he discusses the significance of the flagpole.

Life and Restoration of the Flagpole: a Photo Essay

As soon as the flagpole was erected, it became a center of life in Ravenna.  It is featured in thousands of pictures of the downtown area.  Here are a few pictures and an outline of the story of its restoration.  Click any picture to enlarge it.
Unless otherwise noted, all of the color pictures and the movies are by Tom Riddle. 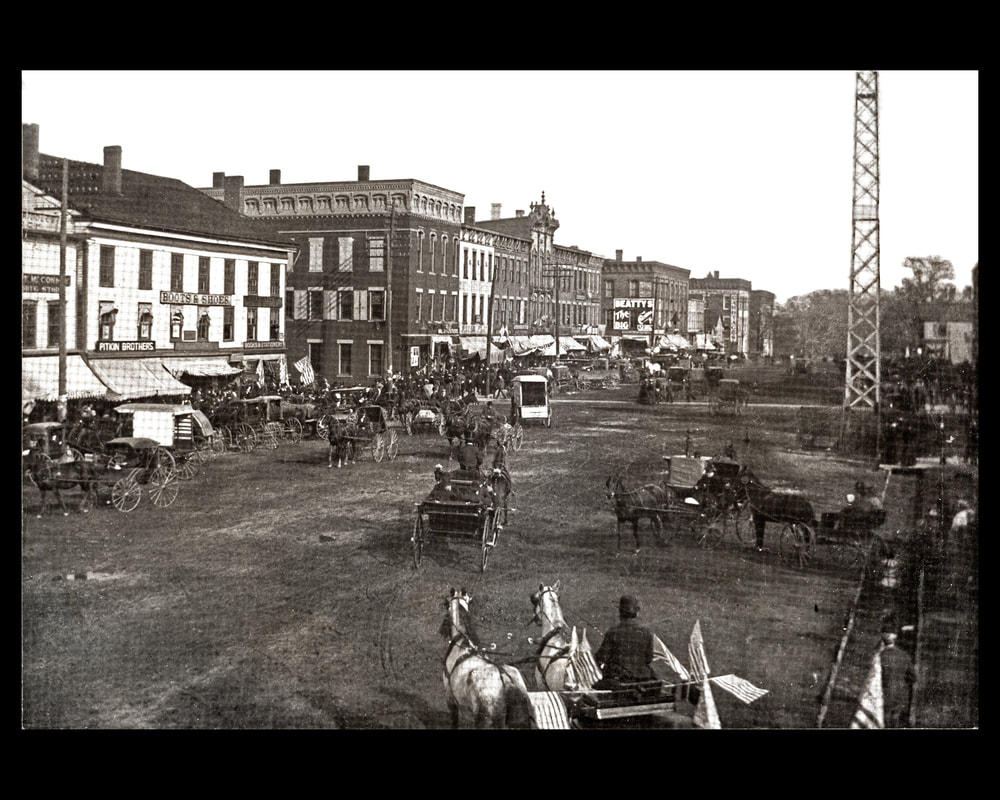 Originally the flagpole was 15 feet further into Main Street than it is now.  In this picture from the turn of the 20th century, Main Street has not been paved.  Note the ditch that seems to run under the flagpole. 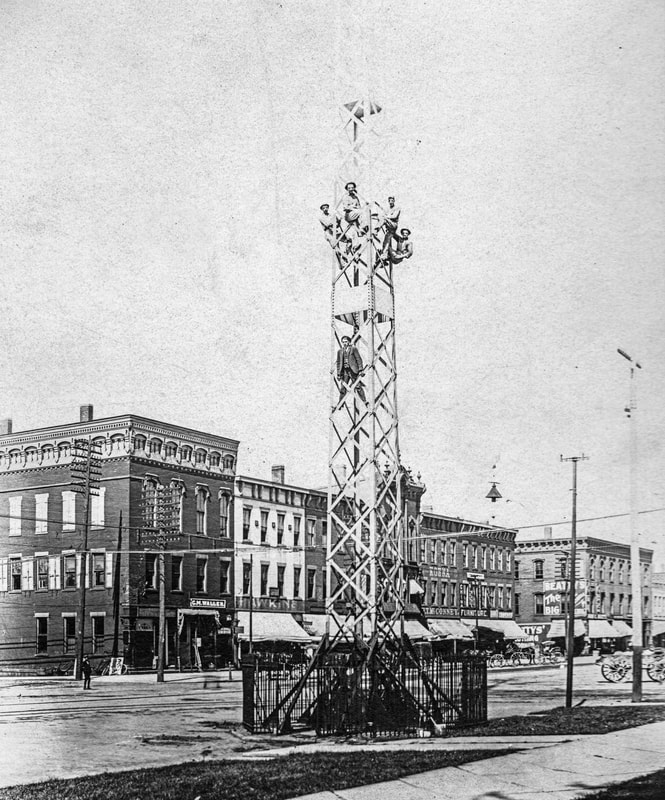 The flagpole has always needed maintenance.  Here a painting crew is very joyfully posing for a picture.  Clearly safety was not something that these men worried much about. 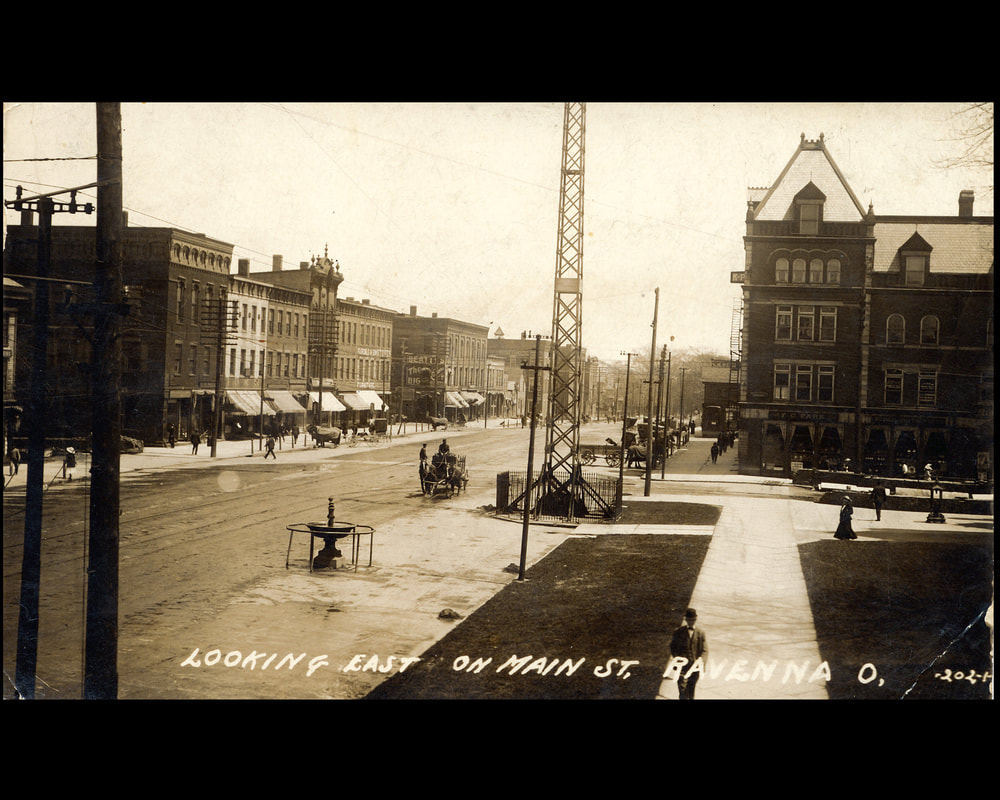 In this picture, dating again from the turn of the century, Main Street has been paved, and piles of bricks are on both sides of Chestnut Street in preparation for paving.  Note the watering trough for horses in the middle of the street and the neat piles of horse manure that have been swept to the side. 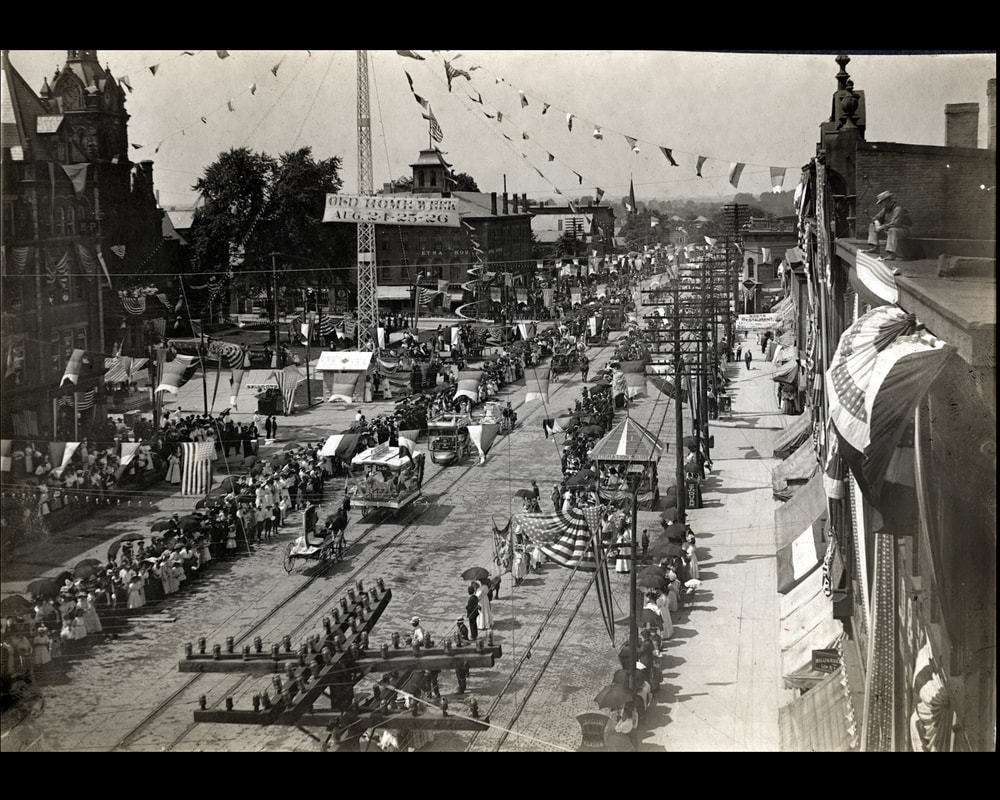 In 1909 Ravenna had a huge celebration called "Old Home Week." It was designed as a homecoming celebration for people who had left Ravenna for other places.  Note the banners tied to the flagpole.
A souvenir booklet produced for the celebration summarized Ravenna this way:
Ravenna is praised by travelers as one of the most beautiful little cities in the State.  Great elms and maples planted by pioneer hands shade its streets adorned by spacious yards and well kept lawns.  Every street has stone sidewalks and five miles of additional street paving are now under way.  A system of sanitary sewerage of recent completion and serving the entire town, was built at a cost of $150,000.  This improvement will be entirely paid for by general taxation, the first in­stance of its kind in Ohio.
Ravenna owns the plant that supplies its homes, factories, business places and parks with pure, soft water pumped from spring-fed Crystal and Muzzy Lakes.  This has been officially declared to be the most successful instance of public ownership in Ohio, the system having been more than self-sustaining since its installment in 1886. 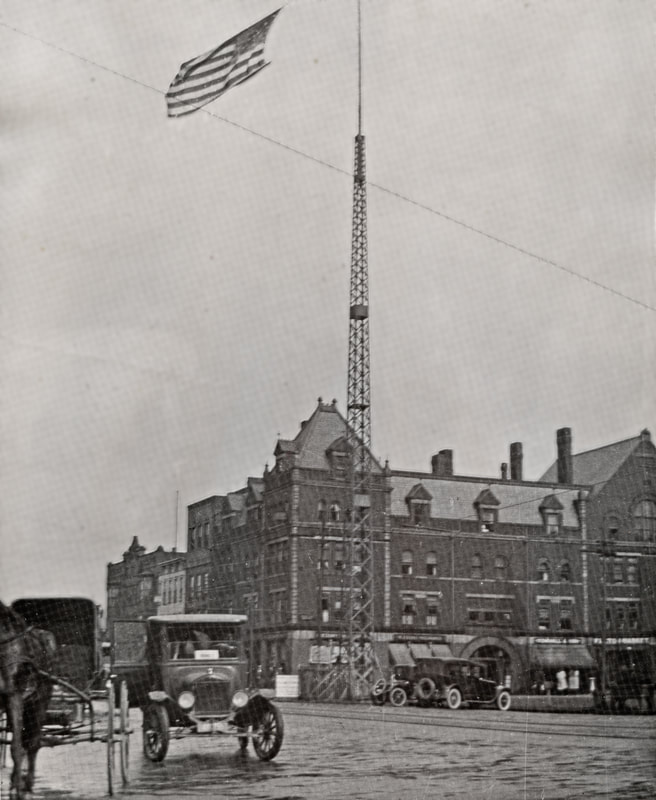 In 1923 the flagpole was moved to its present position, which you see here.  Note that the fence is gone, but that horses are still to be seen in downtown Ravenna. 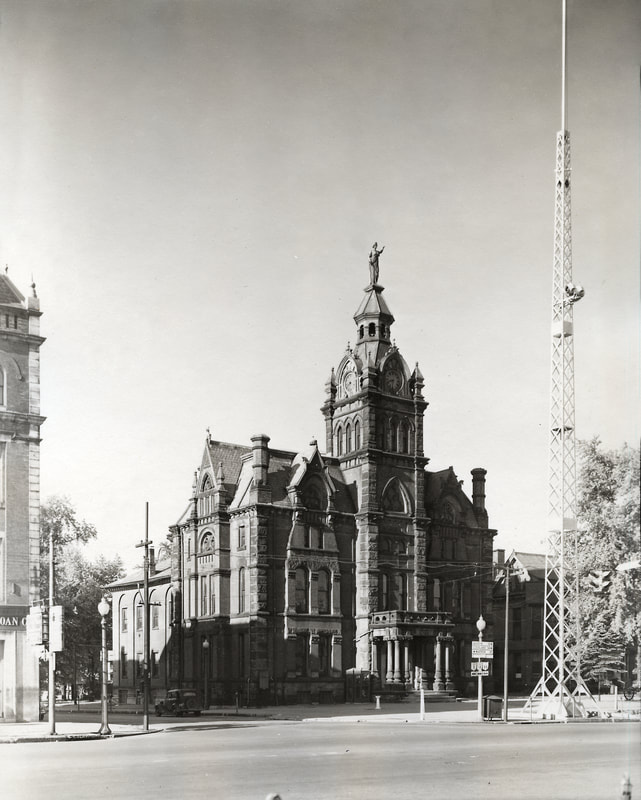 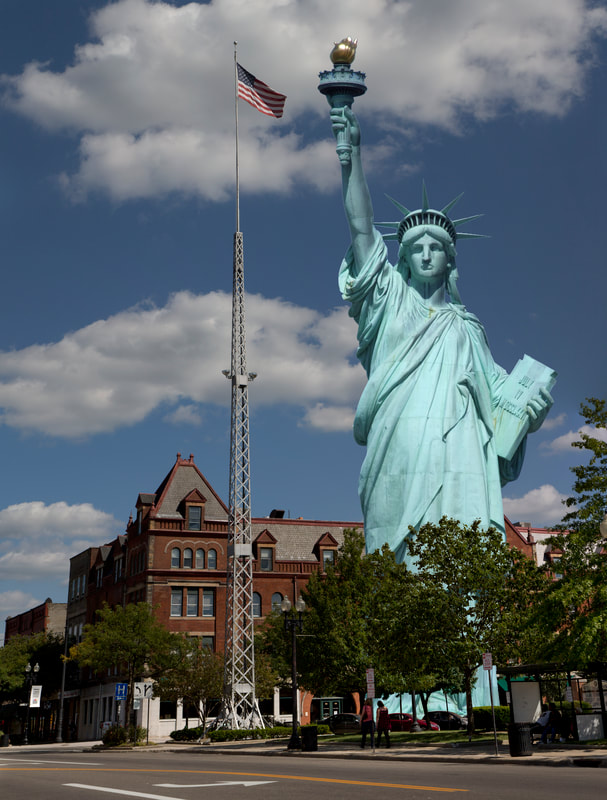 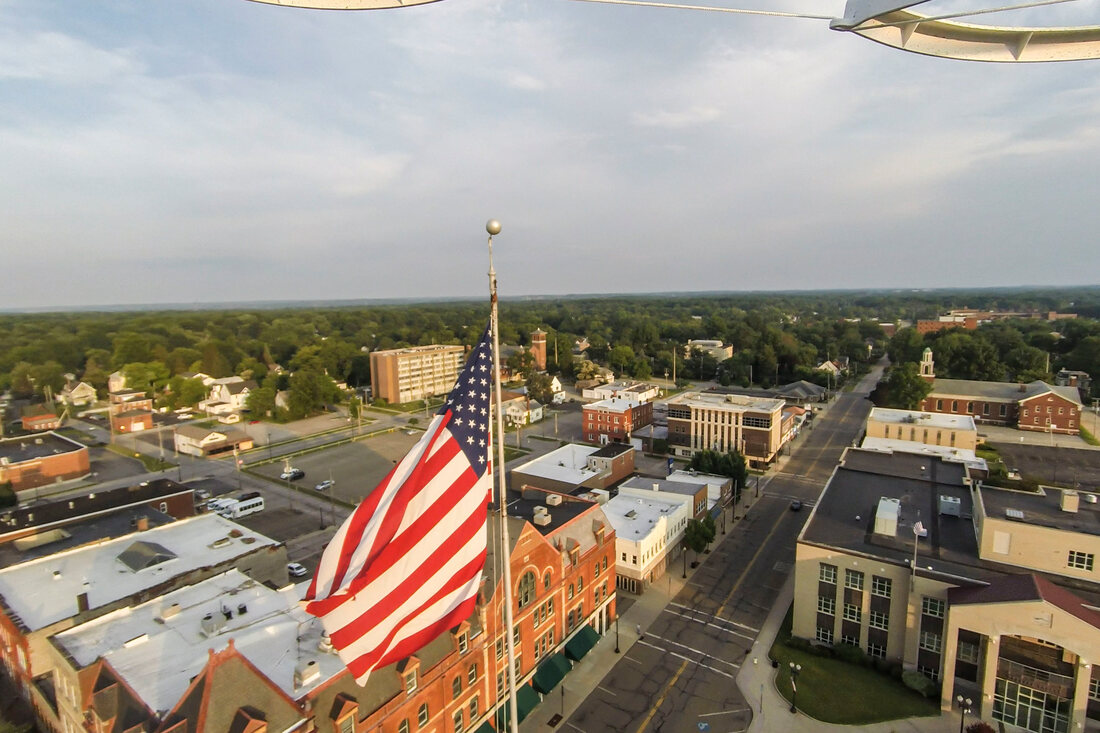 This June 2014 drone picture shows the rust at the top of the pole as well as a pinnacle ball that looks like it won't be there much longer. 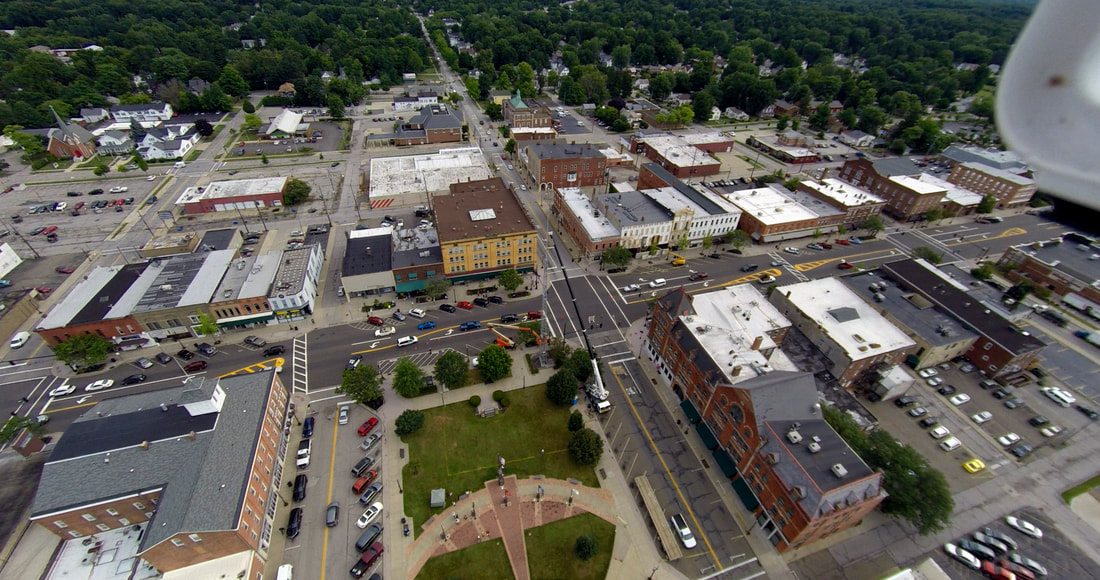 On July 29, 2014 restoration of the flagpole began with the arrival of the crane and lifter. 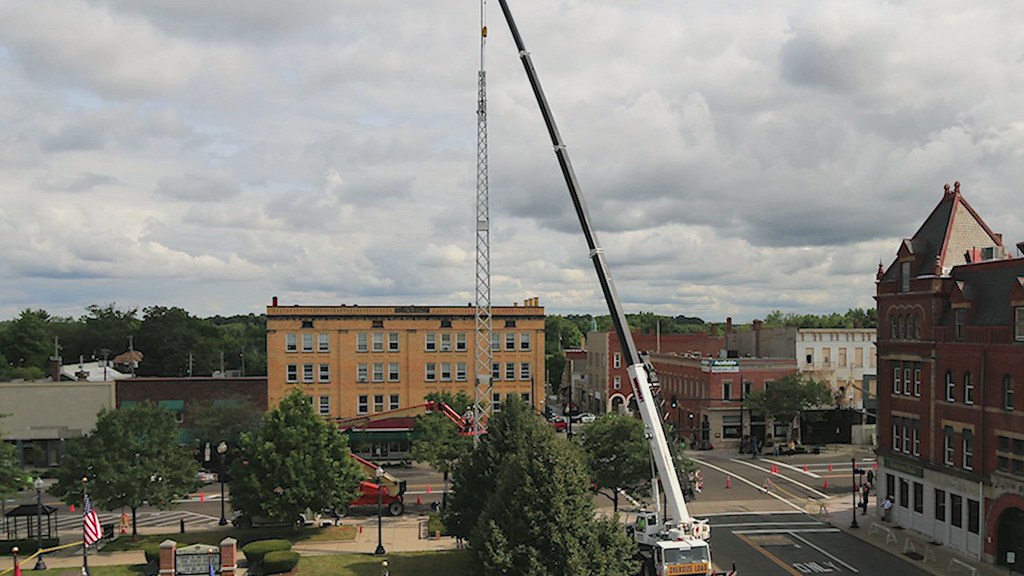 Here, in three minutes, you can see how the flagpole was taken down for sandblasting and repainting on July 29, 2014. 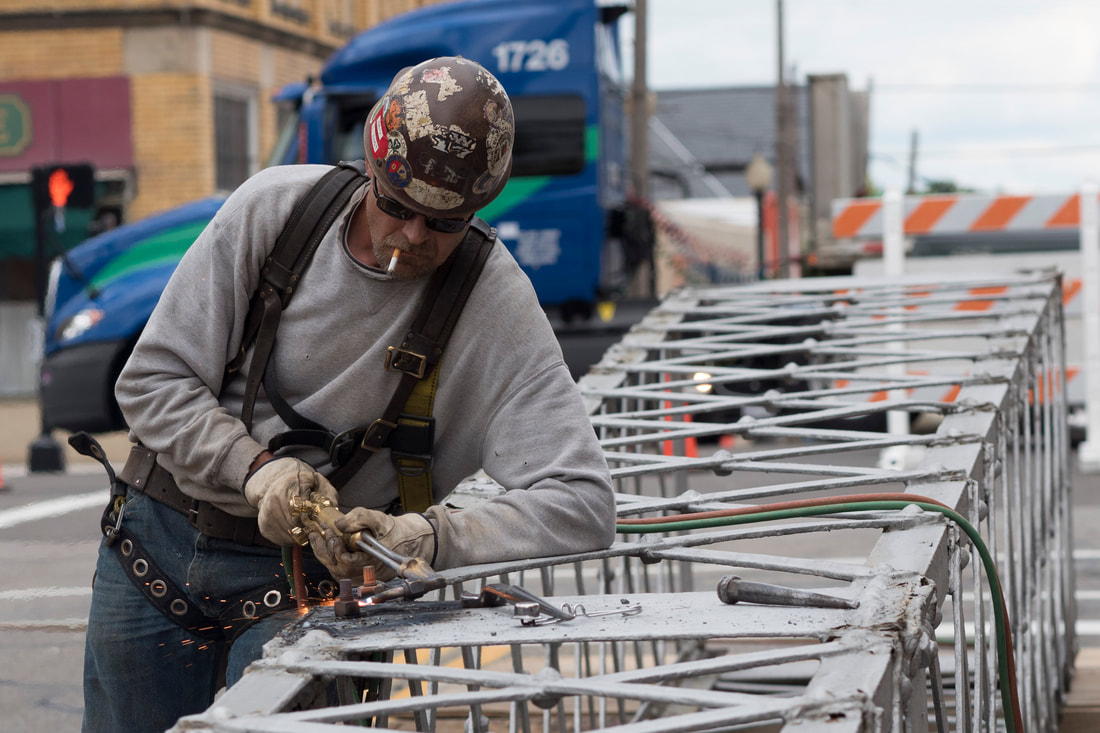 Here a welder who hasn't even bothered to remove his safety harness after working on the lift that cut loose the pole, works to cut the pole into another section so that it can be loaded onto a truck that would haul it away for repair.  To the welders this was just another day at the office. 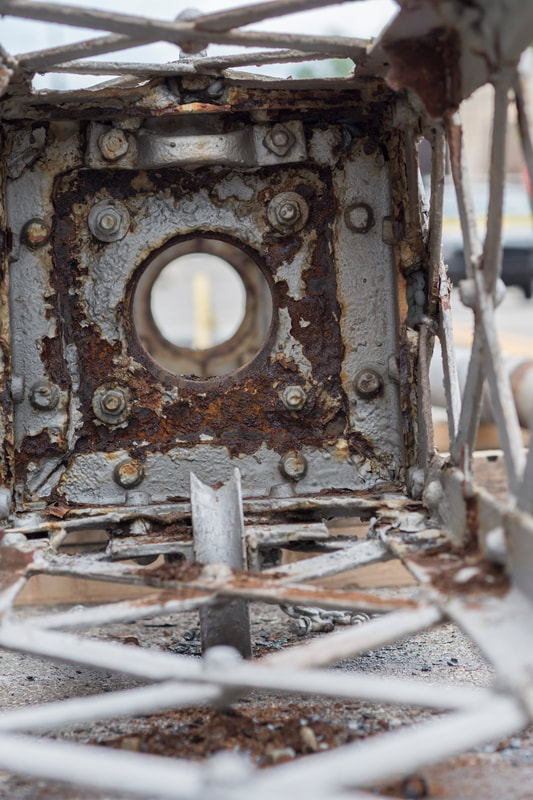 Rust was clearly an issue in the un-restored pole.  The pulley that you see here was used to raise and lower the very top part of the pole, what we can call "the pole at the top of the pole."  The pulley has not been used for a very long time. 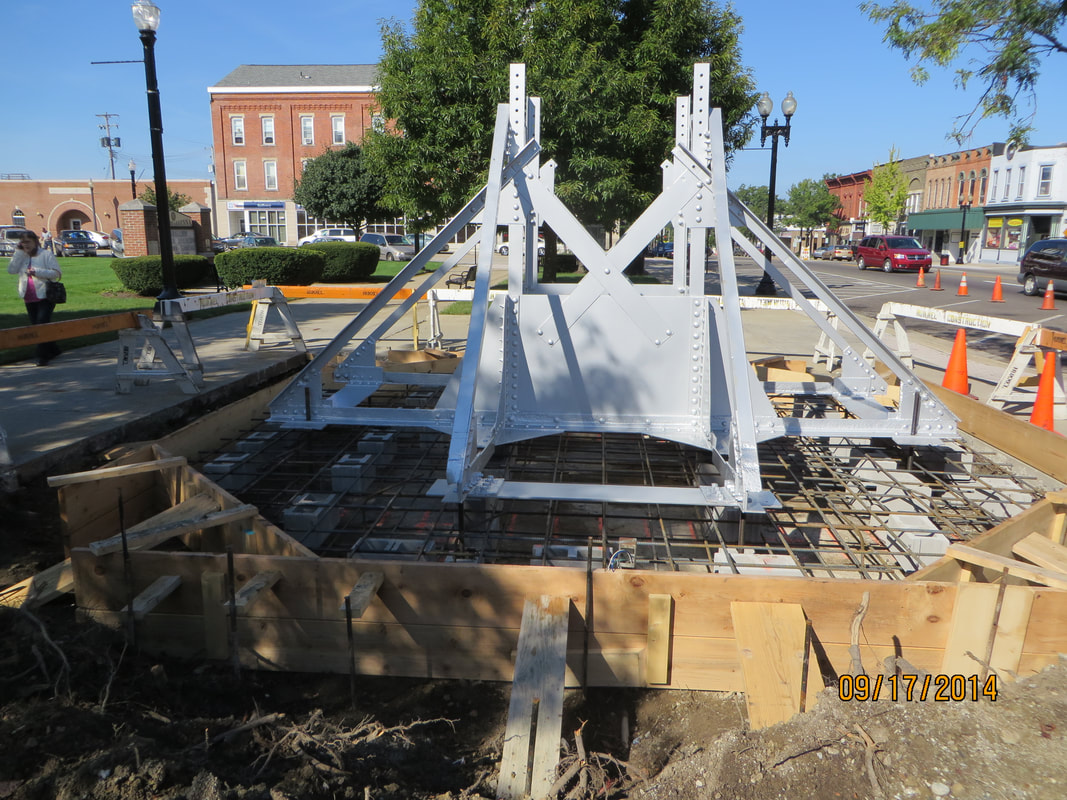 The base of the Ravenna flagpole was totally rebuilt in September 2014. 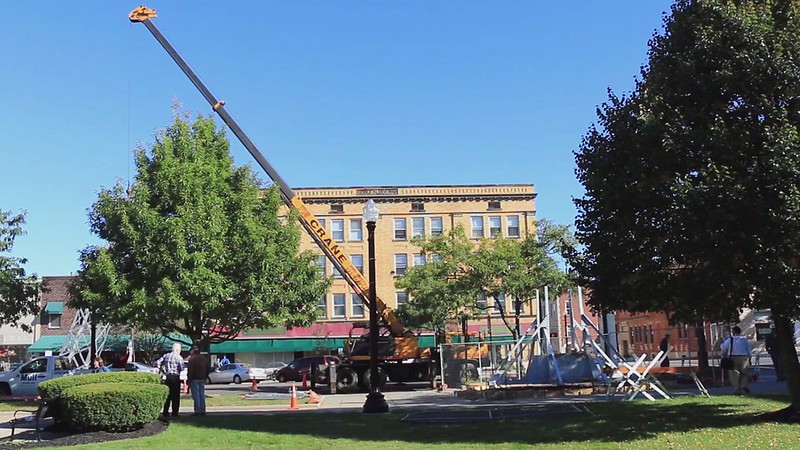 Setting the first thirty-or-so feet of the flagpole back in place on September 24, 2014 was relatively simple.  They didn't even bother to block off Main Street.  The heavy lifting comes with the next movie. 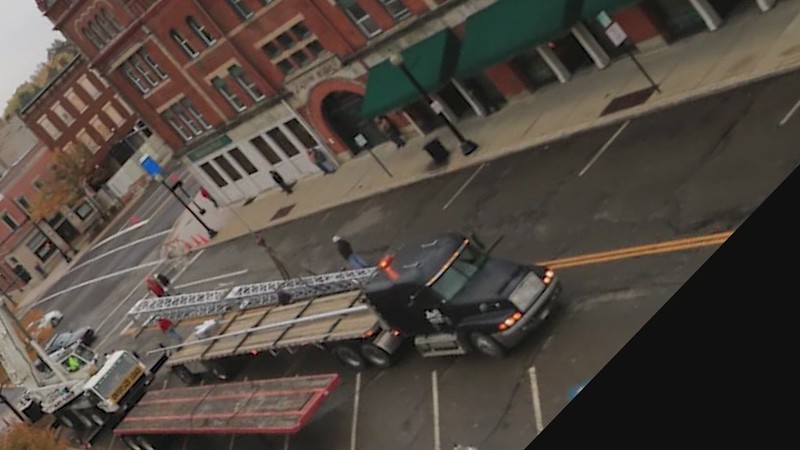 The flagpole was put back in place on October 22, 2014. On that day everyone was worried about rain, but the weather cooperated. 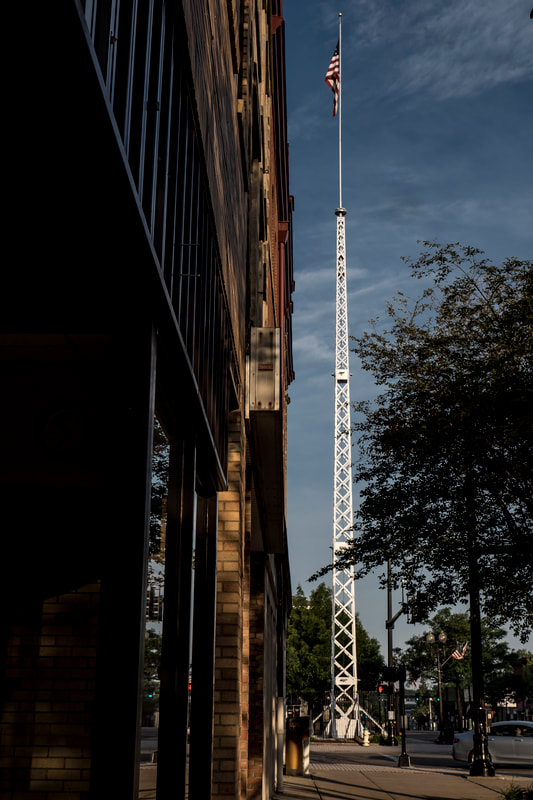 After the pole was restored a fence was put around it.
​Local people were very impressed with the restoration in that the pole virtually glowed in the early morning sun, as you see here. 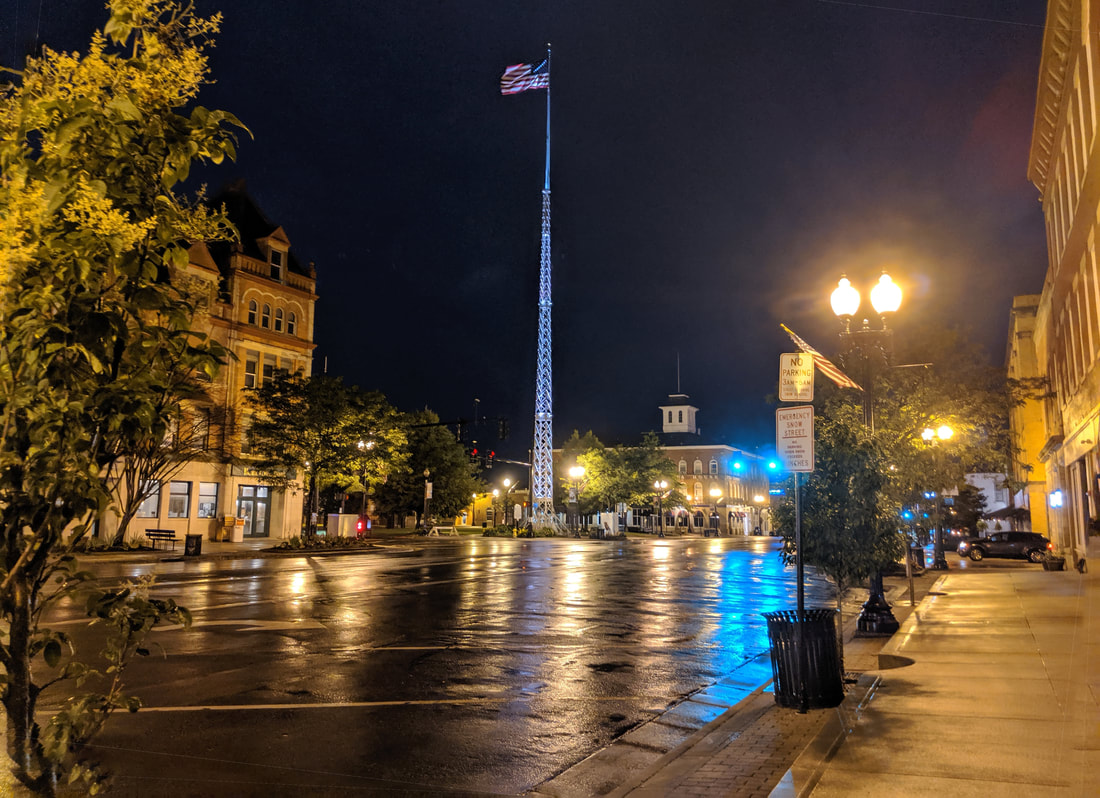 Later LED lights were placed inside the pole.  Some people like to take visitors to downtown Ravenna, park somewhere around the pole, and study the changing lights.
Portage County Historical Society