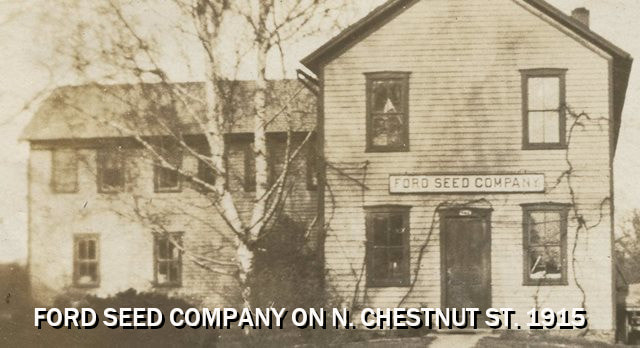 ​The Ford Seed Company collection is housed in a Photographers Studio that was originally located on South Street in Garrettsville. Mrs. Nellie Hurd of Garrettsville donated the early 20th century building to the Society. It was moved to the museum grounds in 1976. The building contained the original backdrop used by the photographer. There is a large window just opposite of where the screen was located and this window allowed the extra light needed to take photos. The building was used as a workshop before it came to the museum. Frank Ford founded the Ford Seed Company, located on North Chestnut Street in Ravenna, in the early 1880’s. The company was known worldwide for their seed catalog sales. Mr. Ernest Jones bought the seed company in the late 1940’s. Mr. Jones was a member of the Historical Society and when he retired he donated the contents of the Ford Seed Company store to the Society. The building is set up as a general store with many odds and ends that would have been for sale to the local residents of the day.